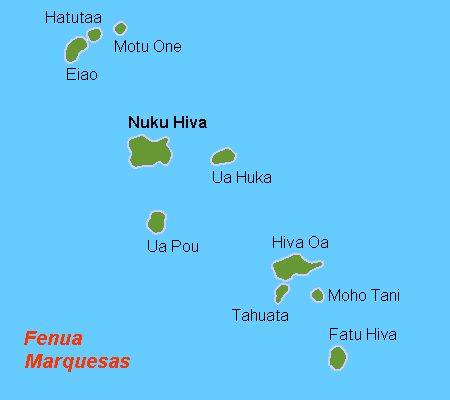 The archipelago consists of 15 islands but only 6 are inhabited and we visited all of those, some twice but to different villages. The capital is Taiohae on Nuku Hiva which was our first port of call.

Plenty of sticks (yachts) in the bay as we made our early morning approach into the bay. Yachties sailing from anywhere around the Panama Canal region to the South Pacific will often make Taiohae their first stop to replenish their supplies. If you listen carefully to CSNY’s Southern Cross song you will hear “downhill run to Pape’ete” and “on this heading lie the Marquesas” just before “We got eighty feet of waterline”. Now I love that song even more!

There was a 20 minute walk along the shoreline into town, always a good idea to see what you can find along the way. This time it was this large kinda weird Tiki like monument.

A word about internet access. The glossy brochure said internet was available on board and sure enough there was the Aranui hotspot on my iPhone but it went nowhere. Asked around and yes, there was internet but it was provided by a satellite link, expensive and of dubious quality. We sat it out and instead preyed on Hot Spots when we went ashore, like to the little restaurant above. The protocol was to get there quickly, buy a $5 drink and they will type in the password for you – no sharing allowed. Generally we were able to check email but not much else, that was all we really needed.

European missionaries in the mid 1800’s imposed their beliefs and practices on the Marquesas’s and a number of grandeur churches are shown off to the tourists.

The Aranui must commandeer most of the islands vehicles to shuttle us around, this time over the mountains to a neighboring town of Hatiheu. The interior is rugged and roads can be poor hence a disproportionate number of 4×4 drive vehicles.

Lets get this posted while I get the next one set up.

One thought on “The Marquesas Islands”