After our little Rope-Bridge cavort we backtracked a bit towards Portrush and set up our Giants Causeway visit which is a big number on the tourist circuit. As shown below we were going to park at the less crowded Dunseverick Castle on the right, walk along the cliffs and end up at the Causeway where we’ll catch the “Ramblers Bus” back to the car, about 5 to 6 miles in 2 to 3 hours. 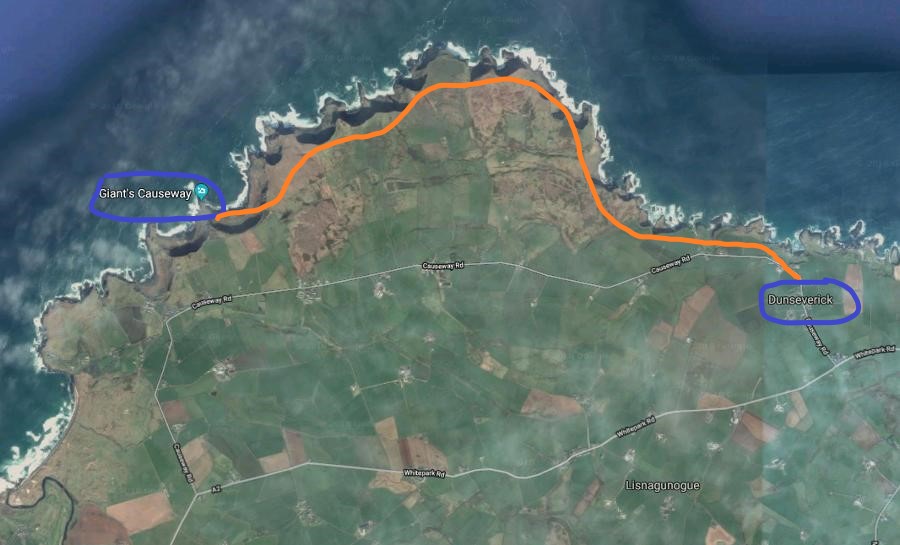 Our uncrowded Dunseverick car park in the background as we set off along the cliffs.

Around one of the bends we spy the tourist ants swarming down below us indicating that we are near the end of the hike.

This is it, an uneven spur of chopped off polygonal’s. From Wikipedia: “Naturally formed basalt columns from Giant’s Causeway in Northern Ireland; large masses must cool slowly to form a polygonal fracture pattern”. A similar geological phenomenon exists at Devils Postpile near Mammoth Lakes in California.

Continuing our slow meander back towards our base in Portrush we stopped in at the Wee Cottage for afternoon tea and scones like only the Irish can provide. I had the tea and Rose could not resist the offer of a latte.

The Wee Cottage is located at the entrance to Dunluce Castle so we walked off our tea while looking at old stones. The castle comprises of outer and inner sanctums. The photo below shows the inner separated by the little pedestrian bridge (drawbridge) and while easy to defend was prone to bits falling into the sea as told in the link above.

That was the last stop for the day and we returned to our Harbour Heights B&B. We had a front room with a large bay window where we could sit and sip our wine as we watched the outside going-on’s.

It’s always a bit of a crap shoot when booking accomodations but I avoid sterile hotels in favor of place like Bed & Breakfast’s where you are more likely to meet people and pick up local tips. Such it was with Harbour Heights and while the website says parking on the street it does not tell you that hundreds of other holiday makers were vying for that same spot you want. We got lucky with a spot and knocked on the front door of the squeezed together row house. “Tim” welcomed us and a few sentances in I’m pretty sure we both grew up in the same country. “You from South Africa?” I ask and sure enough him and his wife are from Durban and have been living in Portrush for the last 10 odd years.

He is also a photographer and posed in front of his Giants Causeway enlargement. By the way it was Tim who told us of the scones at the Wee Cottage.

A little bit west of Portrush is Mussenden Temple and Downhill Demesne. In 1772 the Earl Bishop started to build Downhill as his country house. The word “Demesne” is used to indicate that part of an estate that was for the landowners use only. The temple, based on Temple of Vesta in Italy, sits at the cliff edge and has an inscription which reads: “Tis pleasant, safely to behold, from shore, the rolling ship and hear the tempest roar”.

We wanted to go for a hike in the hills and Google told us to drive up Bishops Road. At a viewpoint I connected the dots that our friend Earl Bishop traveled this road from Downhill to Derry, about 30 miles away. The road is as narrow as they get in Ireland and for cars to pass, each needs to be half on the grassy verge – you get used to it!

Next stop was Derry before heading south to the Republic of Ireland.