Rose ran the St Patrick’s Day Catalina marathon on the 19th of March and we decided to do a spring RV trip to the deserts before it got too hot. Left town on the Wednesday for the 160 mile drive out. Now I knew that the first come first served campsites at Joshua Tree filled up on weekends but what, we’ll arrive mid-week and grab one before the weekenders get here. I cheerfully ask about the availability as we pass through the entrance gate only to be told: “All the campgrounds are full”. That shut me up but we drove in to our first choice anyway. Sure enough, the place was crowded with campers, those hovering to get in and general day trippers having fun. J-Tree is of course a mecca for rock climbers and they had their tents on many of the sandy sun swathed sites. We rode our bikes through the campground on the remote chance we would find someone about to leave. Found a deserted site with a tag on the post which read “Leaving Thursday”. Hey, that’s tomorrow. What if we could snag it then? Took a closer look and there was a second tag behind the first. Someone had already paid for 5 days after these ones leave. That’s it. I’m out of here and we fall back to the proverbial Plan B: There is overflow camping outside the northern boundary of the park.

We find this flat, what looks like a dried mud flat area with a few other campers scattered around. Felt kind of weird simply to stop in the middle of nowhere, no tree, no picnic table, no discerning feature and call it home but that’s what we did. Even rolled out our new outdoor carpet and populated it with our chairs to reaffirm our intent. Actually it was pretty neat and we spent the rest of the day watching others do as we had done. A few tents sprung up and later simply a vehicle stopped  equidistant from their current neighbors and bedded down for the night.

My goal was to hike to some of the old gold mines in the area and we started at the Split Rock trailhead which would give us about a 5 mile round trip. Got there at 9:30’ish and the parking lot was full but we found a nice pullout for the 25′ RV a bit back which was just right. The first part of the trail is along the well established Split Rock loop trail and then our one branches off. The signage in the photo below indicates where two of the junction branches go but says nothing of the section I’m looking at. We step over the little rock barrier and venture on.

We have to climb up to the ridge and this section is the messiest in the sense that you easily veer off-trail and have to scramble to retrieve it a bit further on. Keeps one alert and trail finding skills up to date.

From the crest the trails meanders down, around and up among the landscape attractions. Really a pleasure to wander and assimilate.

The Desert Queen mine is one of the more well known and there is a shorter trail in that invites a steady steam of adventurers to poke around the closed off shafts and relics.

On the way back I am on the lookout for another, less well known, mine but the terrain is pretty inhospitable when ravines and rock-faces bar your way. Having studied Google maps of the area I know the birds eye view but underestimate the natural obstructions that abound. I am off by a couple of hundred yards and start descending a gully full of slabs of rock. I lower myself off a nice jug-hold to some footing four feet below. As my feet touch the bottom my out reached hands feel my once secure jug-hold move – not a good sign. I seem to hold it on balance for a split second longer while I jump back and see a chunk of rock slide down right in front of me. Rose screams: “Andre, are you OK?”. Starting to suffer from shock I muster a “Yes, I’m OK” as I make sure I have all my body parts. Some bent fingers and bleeding finger are luckily the worst of it but I sit down and wait for the dizziness from the shock to subside. Close call.

We find the mine and the little cabin built into the rock which is it’s redeeming feature. Now that I’m here we easily find the “front door” entrance for future reference. 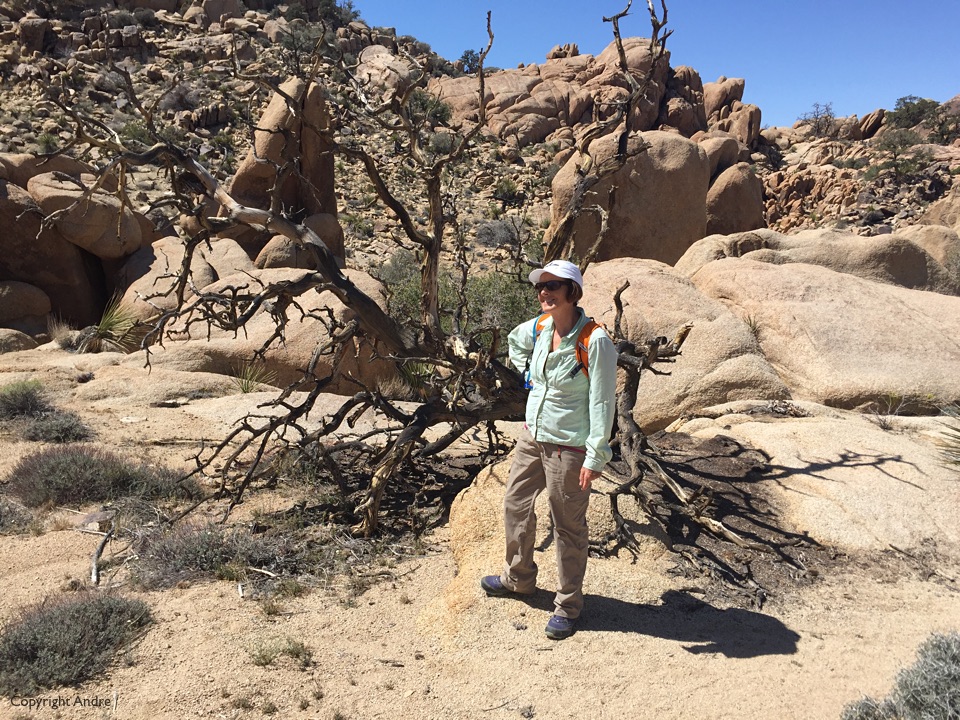 We’re back to our mud flat for a second night as we want another day of exploring the core section of J-Tree. Barker Dam sounds interesting because there is simply no water in J-Tree. Like yesterday we arrive just in time to get a good parking spot and when we finish our hike cars will be circling like vultures waiting for someone to leave.  Even though the place is busy, one of those well published 2 miles or less hikes that anyone can do. The multitude of “trails” allows one to wonder off and look around without continually bumping into people. 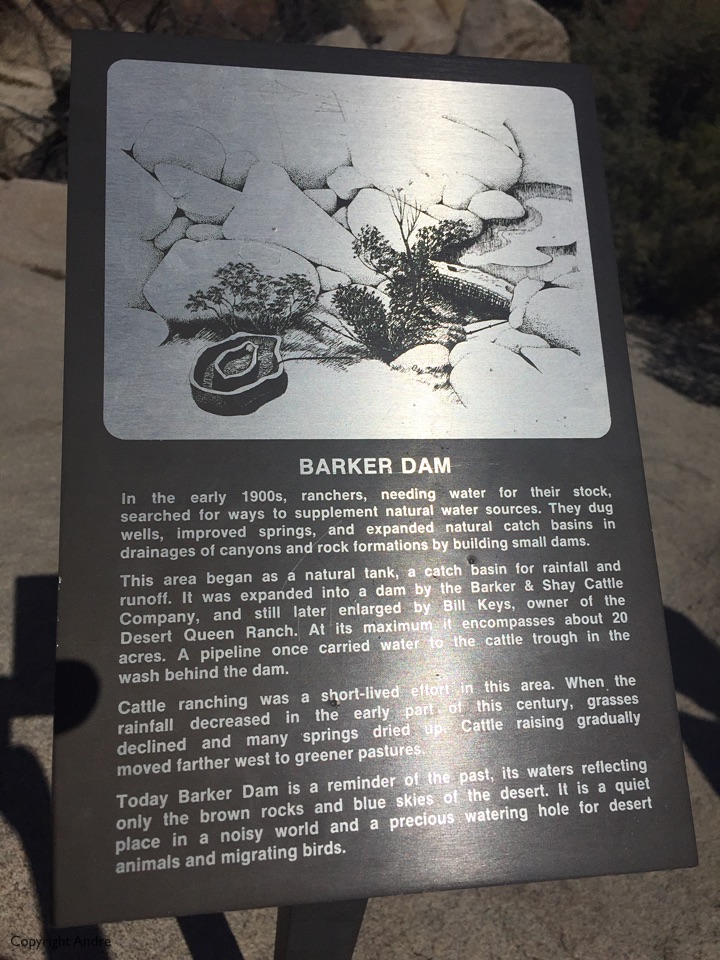 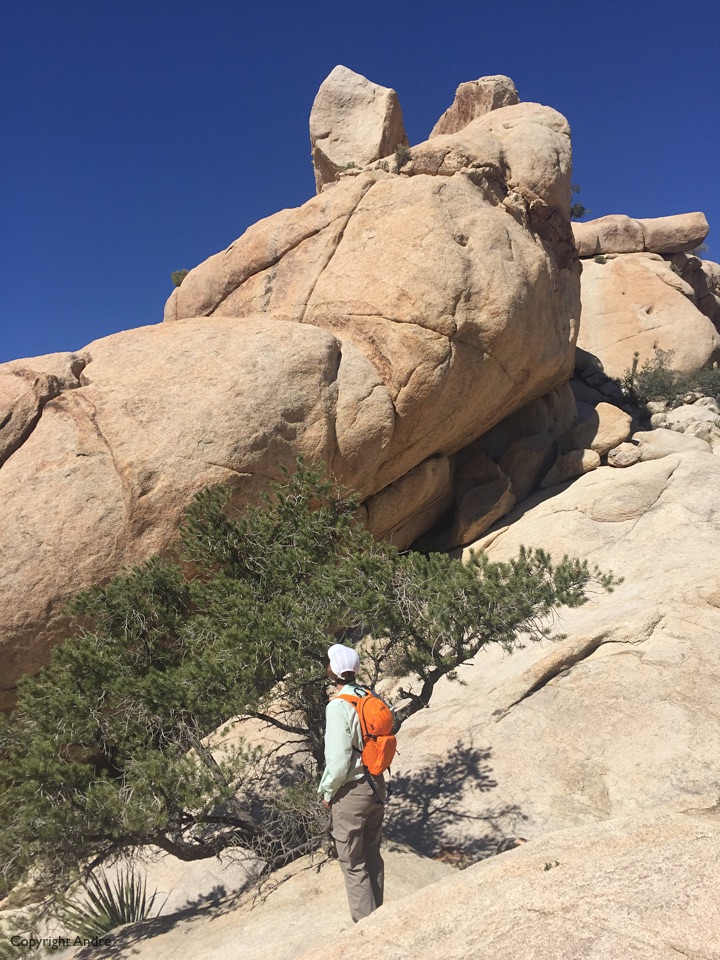 The original Barker Dam was 9 feet high and built in 1900 by a rancher CO Barker. In 1949 rancher William Keys raised it with concrete. Wonder whether it ever filled with water? 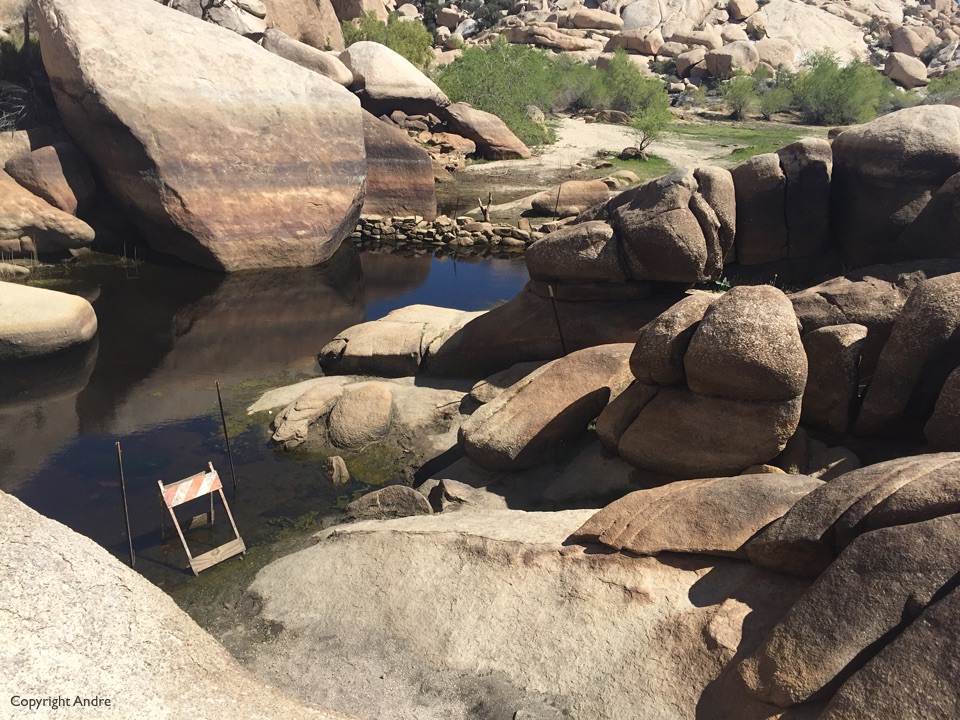 The place was busy with tourists and I spied a sloping slab of rock across the way. Fancy a diversion? I ask  Rose and we set off away from the maddening crowd. The granite rock, or more specifically monzogranite, was nice & knobbly and not too steep as we ascended up above the dam. 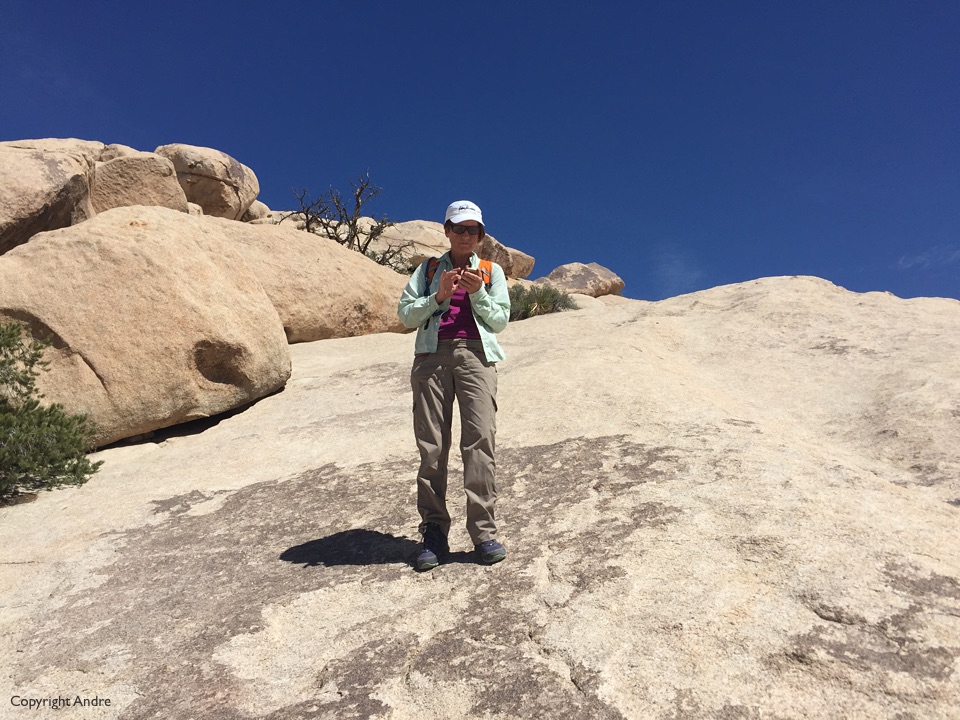 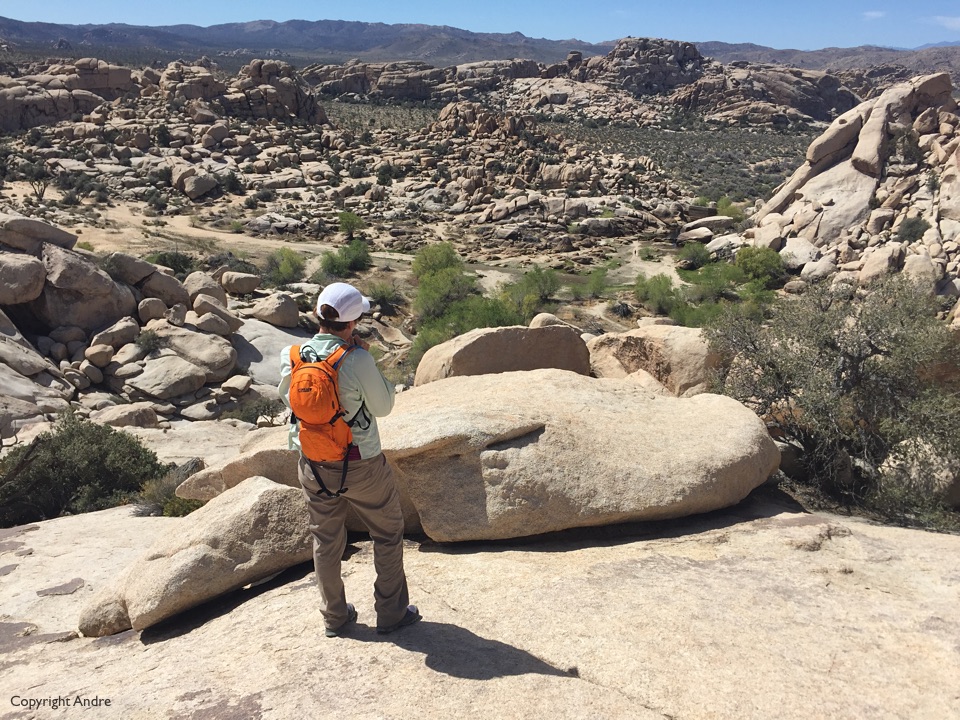 On our descent we see two people approaching us and I hope they are not following our bad behaviour of going off trail. I meet Sherwood, who knows the area better than I ever will. We chat and he tells us we must visit Painted Canyon, just off Box Canyon south of Interstate 10. Suits us fine as we were planning on spending the night in the southern section of the overflow camping and then heading down towards Anza Borrego. 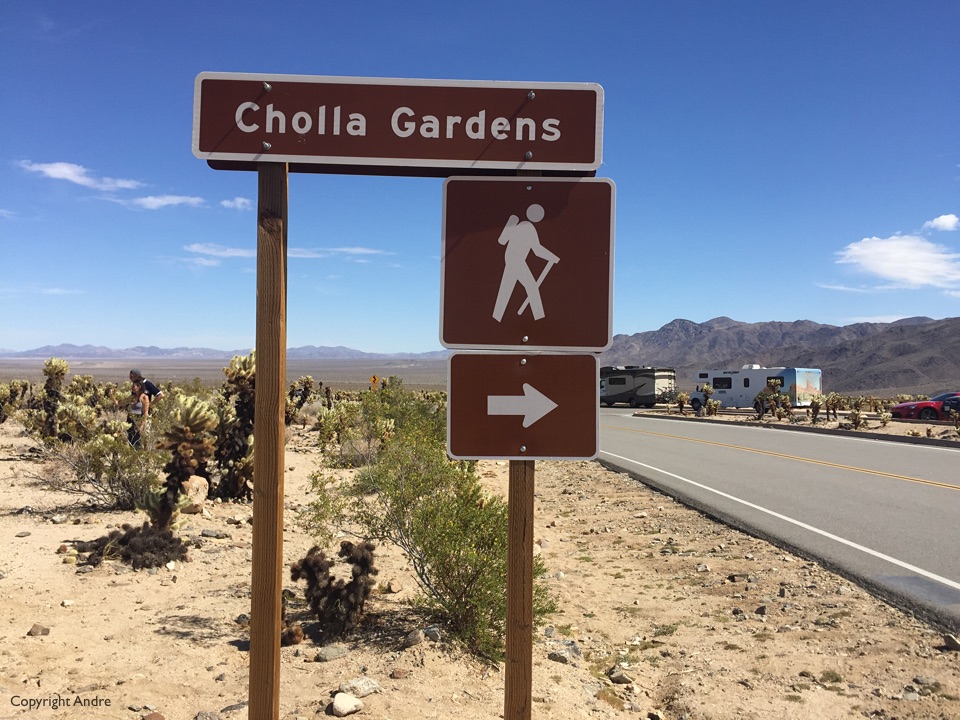 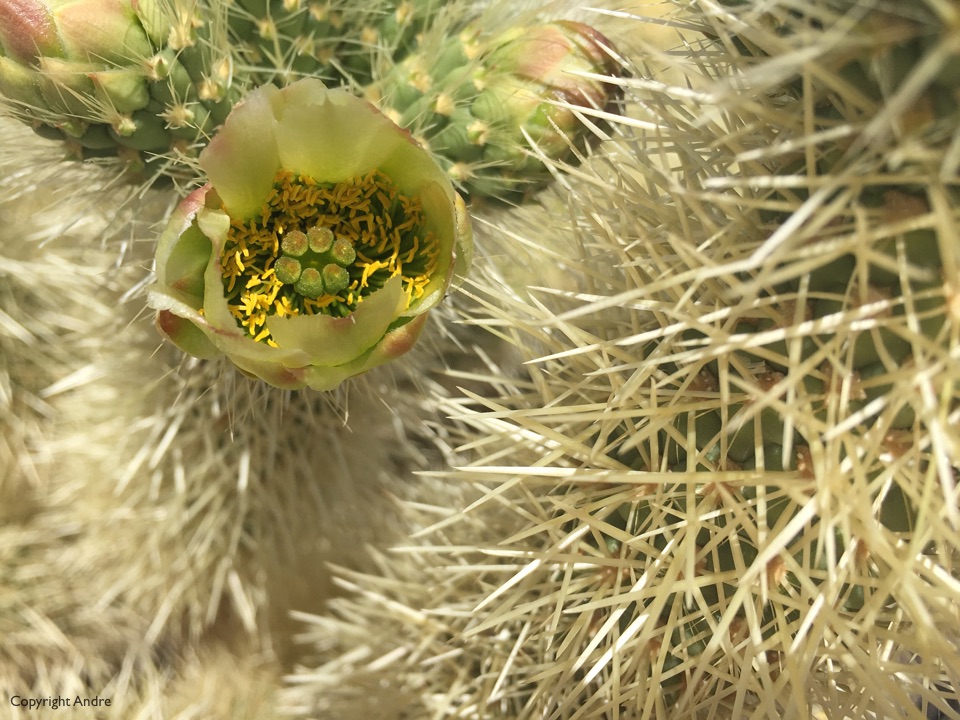 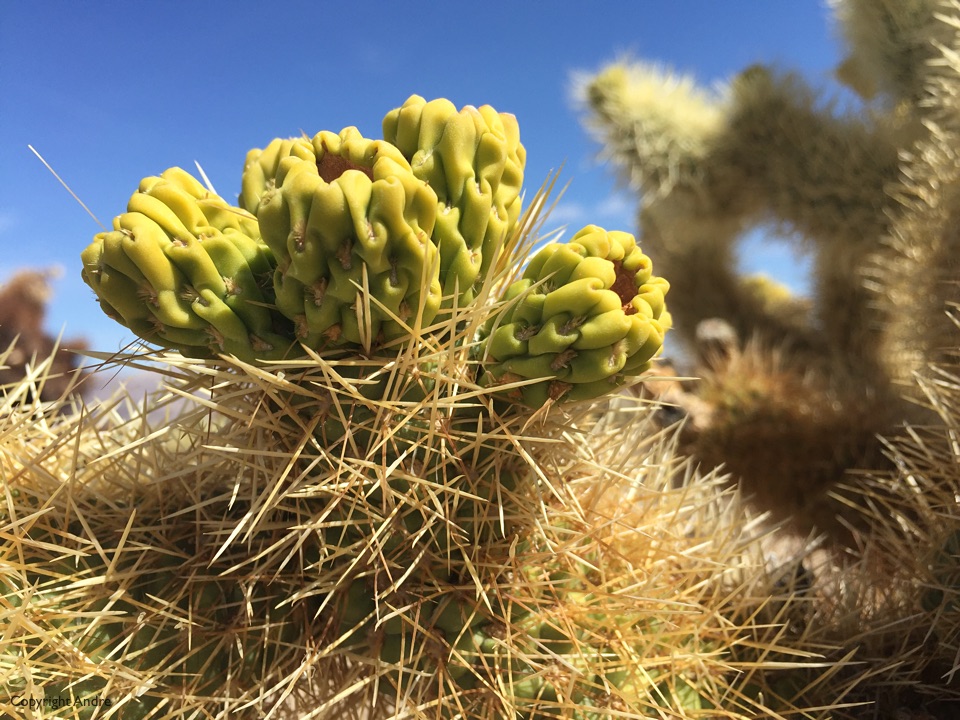 Just outside the park is the so called overflow camping. To keep it short we turned off onto some terrible half dirt road half something worse. At some point I needed to turn around and when I went into reverse nothing happened. I immediately knew we were stuck and got out to see how bad it was. Don’t panic and stay calm as we cleared the sand from all 6 wheels. We had a small spade and luckily we had to go straight back to recover. Took two attempts and my mouth & throat had become absolutely dry from the tension. It was really touch & go and maybe it was the Hail Mary’s that I could see Rose mouthing as I made the final successful attempt to free us.

Found a spot for the night but took me hours to recover from it. As with the fall rock episode I’m not one to stick around and take photo’s of the potential disaster, I’d rather just get the hell out of there.

Hit the paved road soon after 9 am and headed across the freeway and out along quiet Box Canyon road which is like driving down one huge narrowing wash.

At the far end we find out turnoff and signage warning us of impending RV dangers. Now the small amount of Google’ing that I done mentions this 4 mile dirt road and says it’s OK for cars just don’t stop in the soft sand. The mere mention of soft sand has me hugging the pavement but we find a hard shoulder to park on. 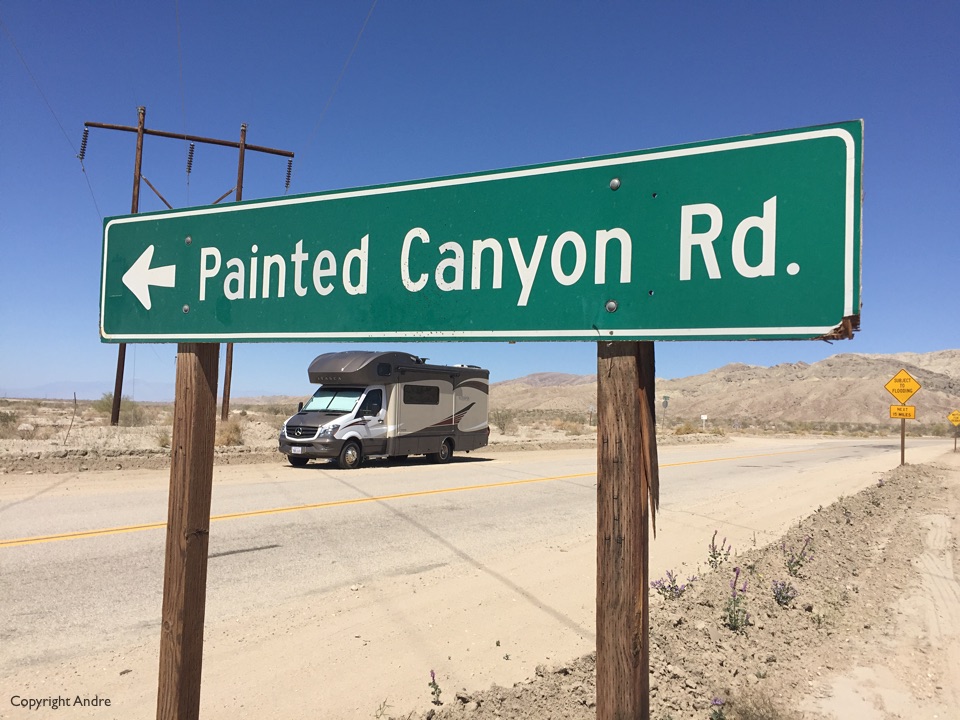 We dust off the bikes and head out with air conditioned SUV’s blasting us with dust.

The hike starts like any other canyon hike, up a wide, sandy entrance that curls it’s way in. After a while there is a small sign indicating a 90 degree left turn up and over a bunch of rocks blocking a side canyon which is, of course, the main slot attraction. 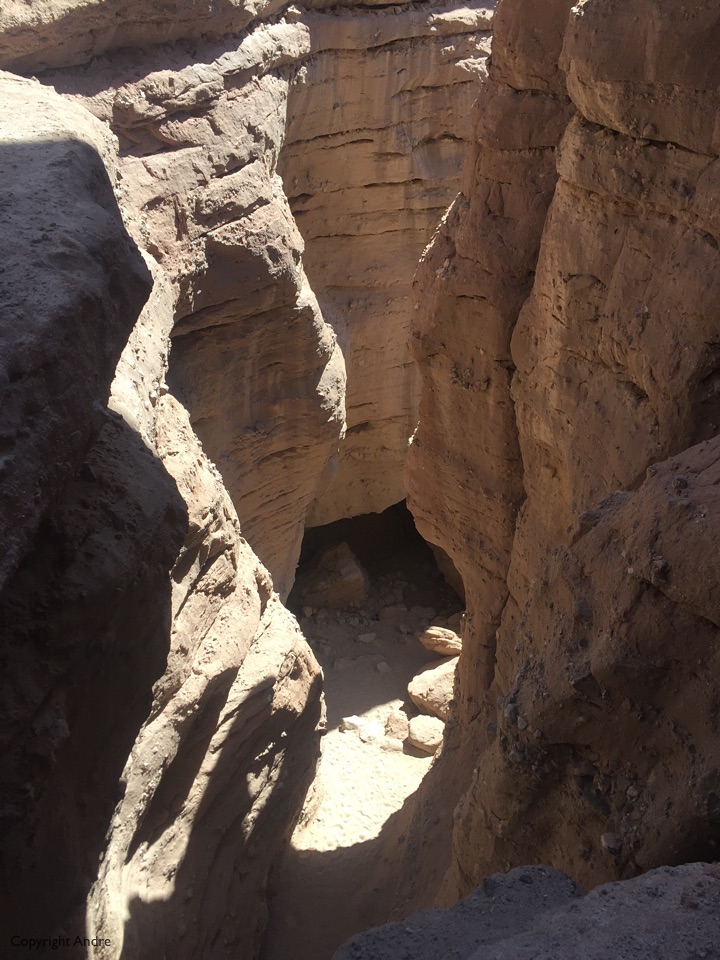 It’s a pretty good slot canyon, better than the one further down in Anza Borrego, and it eventually climbs out to a ridge line.

We  feel we’ve had our exercise and start looking for a real RV park to take on water, dump the tanks and generally clean up. Even hookup to a 30 amp service and run our air conditioning for the first time. Oasis Palms RV Resort, nice but noise from the highway can be annoying.

2 thoughts on “We’re off to the deserts.”